Dear friends of Early Music Alberta,
Because of uncertainties due to the Covid-19 virus, including the self-isolation of several of our contracted musicians in Switzerland, Early Music Alberta’s Board of Directors has decided to move our 10th-anniversary Early Music Festival to the fall of 2020.
Our several Festival prize tickets will be honoured at that time of course.
The GOOD news is that we have received several grants and generous donations so that we are confident that we can put on an exciting festival this autumn!
Sincerely,
Josephine van Lier, artistic director

The Four Seasons (Le Quattro Stagioni) is Antonio Vivaldi’s (1678-1741) most popular set of concertos. What a bizarre phenomenon that these pieces are heard nowadays as elevator and supermarket Muzak, as street music on anything from accordion to Jews harp as well as annoying, “ on hold” telephone entertainment!

However, the popularity of The Four Seasons is nothing new. They were amongst the Top Ten tunes during the 18th century! Spring was performed regularly from 1725 to 1790 at the Concerts spirituels, the Parisian concert series. There are also many period arrangements of the concertos for diverse instruments, from solo recorder to full orchestra with choir. Stealing music was common practice in the baroque period. Like clay, it was a medium to be modelled to fit different instruments and new performance situations. Les Voix humaines is, therefore, following a well-trodden, baroque tradition by arranging these pieces for the fun of it!

Each of Vivaldi’s seasons is filled with word painting: you can hear the birds singing, dogs barking and the hurdy-gurdy in Spring, the thunder storms and mosquitos in Summer, the drunken farmers and hunting horns in Autumn and the wind, ice and rain in Winter. Vivaldi includes short poetic descriptions of the seasons throughout the music which you will hear during this performance. You’ll also hear some other well-known jazz standards, pop tunes and traditional songs (by Henry Purcell, George Gershwin or Joseph Kosma) that we’ve slipped into the concertos for your pleasure and ours.
Luckily we’ll never know if Vivaldi is turning in his grave! 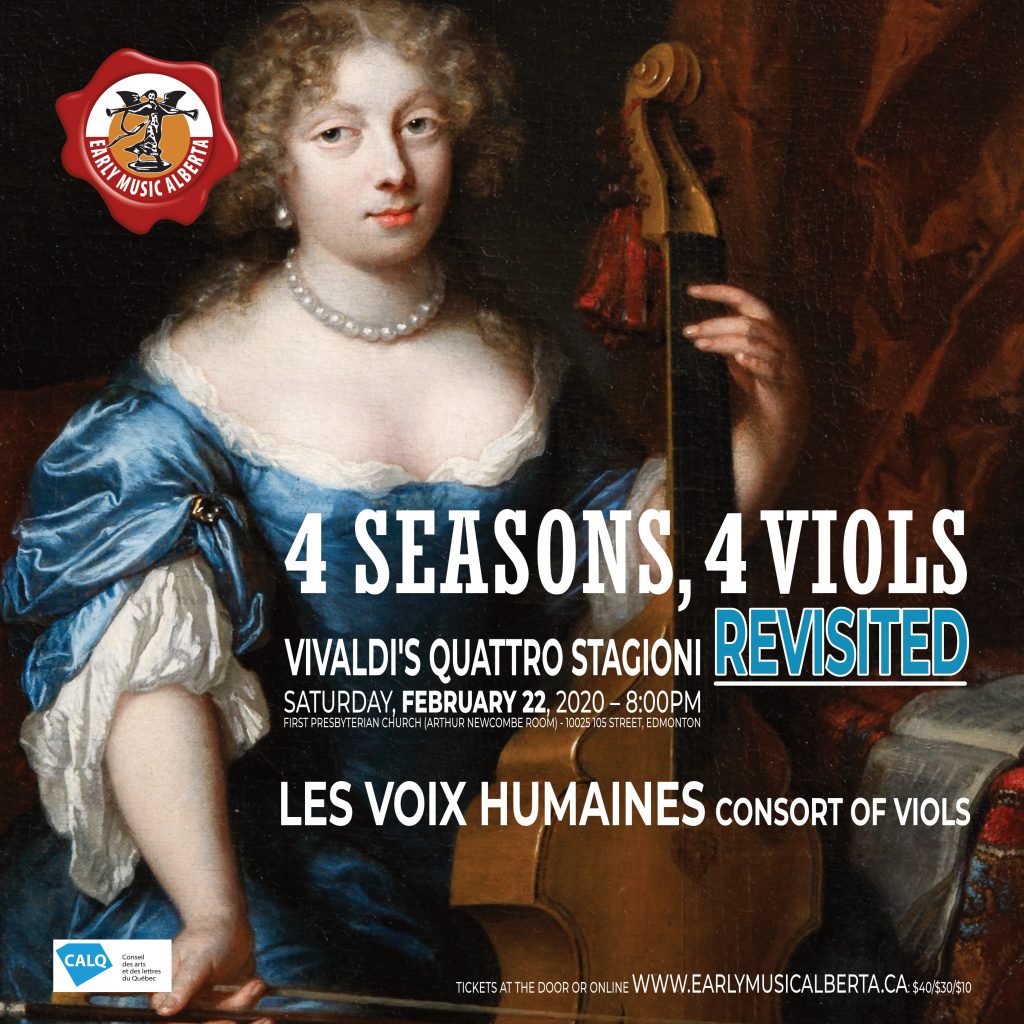 Les Voix humaines
Recipients of numerous prizes, Susie Napper and Margaret Little, have thrilled audiences worldwide with dashing performances of early and contemporary music for viols since 1985. heir musical complicity has been compared to the skill of two trapeze artists or the telepathic communion of a pair of jazz saxophonists! They are renowned for their spectacular arrangements of a wide variety of music for two viols and have become a world reference for the music of Sainte-Colombe.
Les Voix humaines has toured Canada, USA and Mexico, Europe, Australia, New Zealand, Israel, China and Japan, has recorded most of the repertoire for two equal viols and has worked with musicians such as Bart and Wieland Kuijken, Charles Daniels, Eric Milnes, Skip Sempe, David Greenberg and Nigel North.

Les Voix humaines Viol Consort
With colleagues Mélisande Corriveau and Felix Deak, Les Voix humaines Consort has been very active performing unusual programmes for viols including an arrangement of Vivaldi’s Quatro Staggione for four equal viols, Tobias Hume’s Poeticall Musicke and the works of Tomaso Lupo and Giovanni Trabaci. The consort has been touring Europe and North America for the past several years and has recorded classics such as Bach’s Art of Fugue and Purcell’s Fantasias.

The recording of the complete Concerts à deux violes esgales by Sainte-Colombe (4 double CDs) is a world premiere, and the fourth volume was awarded a Diapason d’Or. Les Voix humaines records for the ATMA label or self-produces recordings.

Our fundraising concerts are truly special, intimate events, where you get up close to the musicians and get transported to a different era.
The tickets are $150
All of the proceeds go Early Music Alberta’s programming.
You will receive a tax receipt for a portion of your ticket price.

Tickets must be pre-purchased online or by cheque (mail to 617 Henderson Street, Edmonton, AB T6R 1S4). 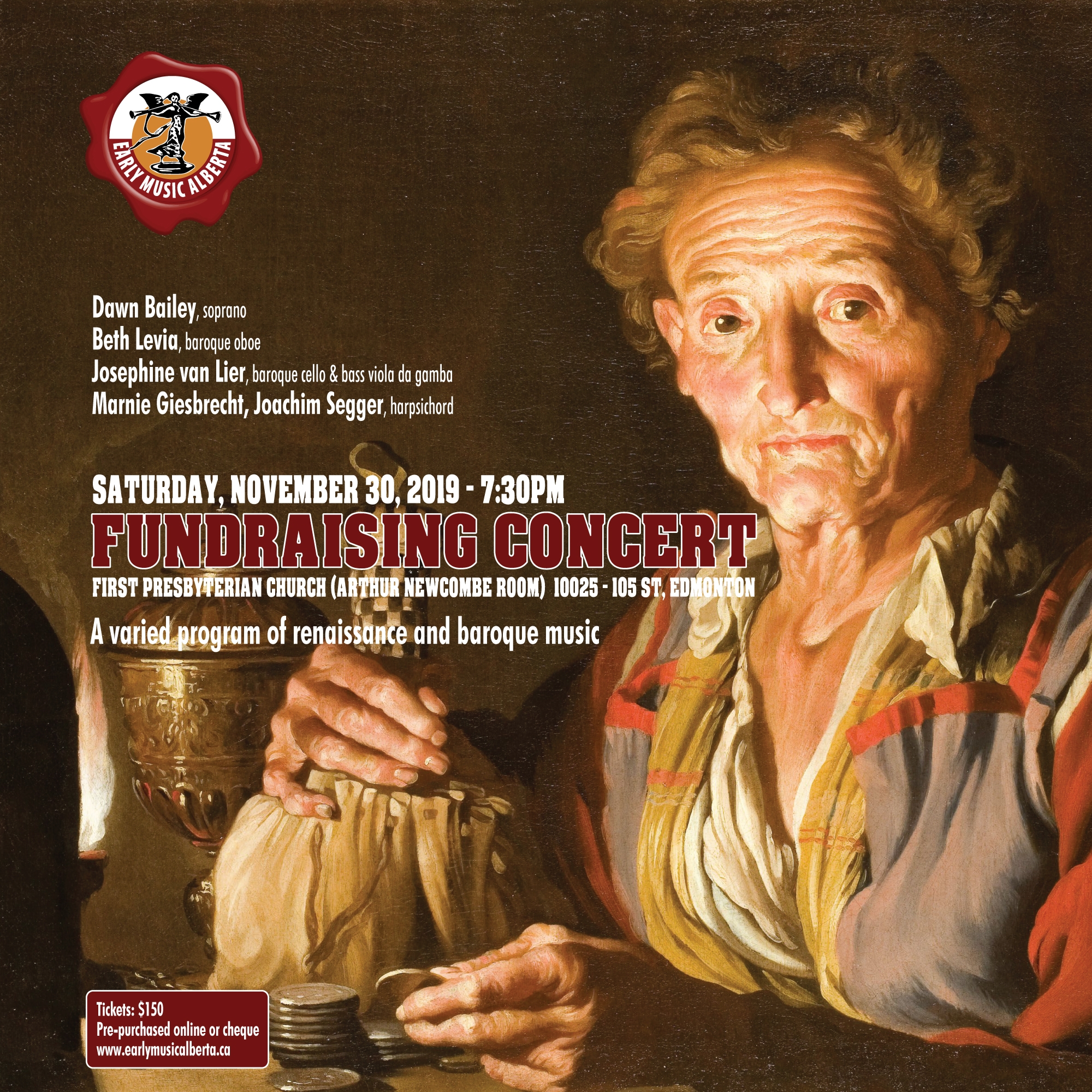 On the program will be two cantatas by Alessandro Melani, as well as works by Purcel, Scarlatti and Telemann. Edmonton’s own baroque trumpeter Frédéric Payant will shine in these cantatas together with the ever so spectacular – and audience favourite – soprano Dawn Bailey. 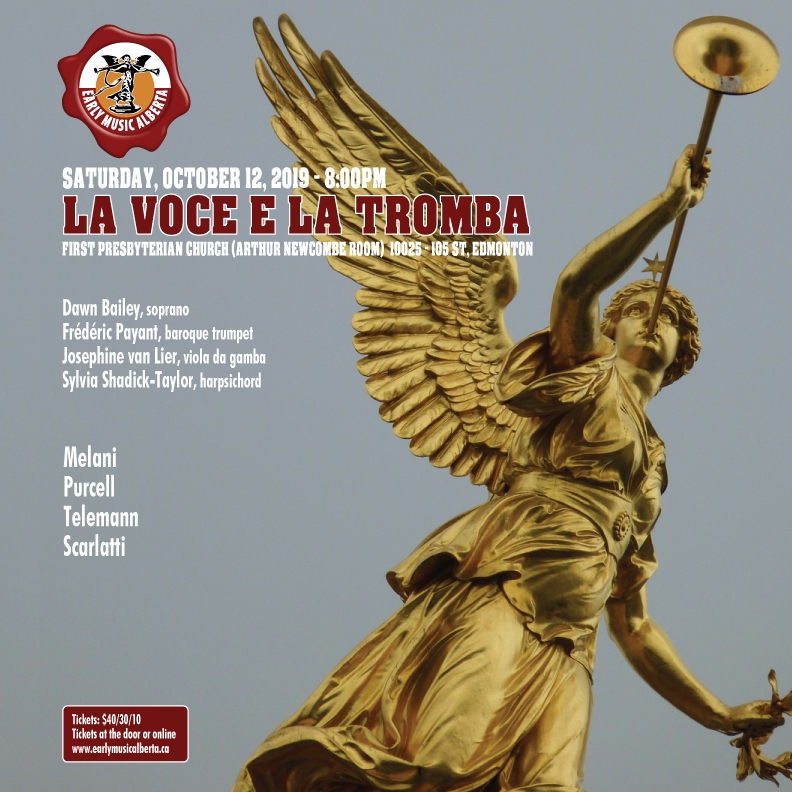